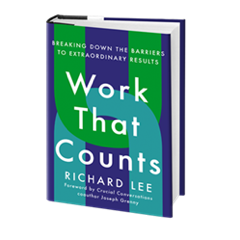 A guest post by Richard Lee, author of Work That Counts.

On a Saturday morning years ago, I distinctly remember a CEO bringing his execs together for a meeting to discuss a critical problem. These were all senior people, competent, forged at the best schools with the best companies. I was there as his organizational consultant. After about an hour, he became increasingly frustrated, and at some point, said to his team, lead, follow or … get out of the way.

You’ve all heard this seemingly innocuous phrase. I was mildly offended at the time but couldn’t quite articulate why. What was he trying to communicate? Knowing him and the situation, when he said lead, I think he meant basically to stand up, take a position, and drive others to follow your wishes.

Remember he was frustrated. By follow, I think he was suggesting that everyone else present get in line and help the “leader” move forward. Get out of the way was surprisingly strong language. Either stand down, keep quiet or at a minimum don’t get in the way. And if you were called out too frequently to get out of the way, that may be a sign that your credibility with him and the team is trending downward.

So, if you have a different perspective than the solution of that moment, if you voice it, is that getting in the way? Especially if perceived that way by a frustrated and impatient CEO? Doesn’t sound like an invitation to participate to me.

Having worked with hundreds of teams with many of the world’s best innovation companies, with a behind-the-scenes vantage point, I’ve learned that whether teams are planning, problem solving or executing, neglecting to take full advantage of the diverse perspectives on a team is like leaving IQ points on the table (as one of my CFO friends once said).

Whatever your level is on the team, the real challenge isn’t to simply lead, follow or get out of the way. It’s to lead, follow or lead with, other smart, capable people. I often refer to this as collaborative leadership, again, at all levels throughout an organization.

When I was offered my first management role decades ago, I was given the impression that to lead was to direct, and somehow tell people what to do. Of course, there are situations where that is exactly what is called for. But, most often, our goal is to tap into the vast knowledge base that surrounds us in the people who make up our teams. It’s more often about finding that sweet spot, of being a force for good, moving the team forward, along with humbly recognizing that we have to crack into that broader intelligence represented by the team as a whole.

In my book Work That Counts: Breaking Down the Barriers to Extraordinary Results, I found that three interdependent mindsets emerged that were critical to making a real difference. If any one of these three was weak, it would disproportionately diminish the team’s impact.

Again, we need all three mindsets to succeed. If any one is weak, that is a real problem.

Let’s focus on that first mindset, getting the fuel to take action and drive decisions through an effective empowered relationship. As one example, consider what you can do to help your manager or team leader develop increasing confidence in your judgment. What’s the likely consequence? Consider the opposite, if they don’t trust your judgment, expect micromanagement.

However, if they increasingly trust your judgment, it’s hard to imagine that you wouldn’t get increasingly more autonomy to take action and drive decisions. How? This can range from initiating those tough conversations if your feel stymied, to ensuring that you are demonstrating that you’re on board with the bigger picture, the strategy and vision. Consider asking your manager, “is there anything else that I can do to increase your confidence in me driving (whatever project you’re leading)?”

As a newer manager and leader, there’s much more to success than lead, follow or get out of the way. Learn to lead with, and begin the journey to do the best work of your life and those around you – and make your work truly count.

Richard Lee is well known in the California Bay Area and Silicon Valley for helping companies build organizational capacity to scale and grow. He designed Work That Counts – In and Across Teams™, a new program designed to help participants make a bigger difference in complex organizations. Prior to launching Work that Counts™, he consulted with hundreds of companies and thousands of professionals around the country and built a business around VitalSmarts’ Crucial Conversations.