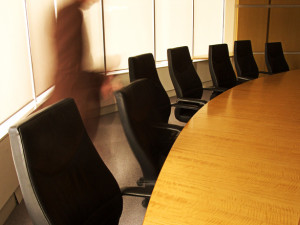 Many employees probably groan and grumble when they see that you have scheduled yet another meeting. But Cameron Herold, a business development expert and author of Double Double: How to Double Your Revenue and Profit in 3 Years or Less, insists it doesn’t need to be that way.

“Meetings aren’t terrible,” Herold says. “We’re just terrible at running meetings.” He says you can make better use of the time your team spends in meetings, and improve employee morale and productivity in the process, if you follow five simple steps.

Meetings that don’t have a clear agenda tend to get off track easily. They also often include people who don’t need to be there and would be better off back at their desks, completing important projects, Herold says. The agenda can be short, but should include the main purpose of the meeting, the possible outcomes and the action items to be covered.

“An agenda prevents the meeting from being hijacked by some random topic,” Herold says. “It also allows your more introverted team members to prepare what they want to say in the discussion. Most introverts won’t chime in when they don’t know the agenda ahead of time and you could miss some great ideas.”

There are basically three styles of meetings: information share, creative discussion and consensus decision. In an information-share meeting, the information flows in one direction. Either employees tell the leadership something, or senior management has something to say to employees.

Creative discussions are brainstorming sessions. People toss out ideas without any judgments made about feasibility or validity, and decisions come at a later date. Consensus-decision meetings are held when a decision is needed. Herold warns that these can get testy, but eventually the participants need to reach a consensus. “Once you’ve concluded the meeting, put it behind you,” he says. “Don’t continue the discussion outside the meeting.”

Start on time and end early

If you scheduled the meeting for 10 a.m., start at 10 a.m. “This shows respect for people’s time, and also reflects something much bigger,” Herold says. “If you can’t start a meeting on time, why would it be any different for anything else that’s going on in a company?” End the meeting five minutes early. That gives people time to grab a cup of coffee, check emails, go to the restroom or chat with colleagues before their next meeting.

Some people talk a lot in every meeting. Others rarely speak. For a meeting to be successful, you need to get everyone engaged, Herold says. Foster dialogue with newcomers or quiet people first, and then go around the table, moving up in seniority as you solicit feedback or ideas. Also, make sure people are not distracted because they are responding to email on their cell phones or laptops.

Every meeting should have a chair, a timekeeper, participants and a closer. The chair announces the type of meeting it is and makes sure everyone sticks with the agenda. “The job of the chair is to prevent the meeting from going sideways,” Herold says. The timekeeper does what the name implies, making sure everyone stays on schedule and that no one lingers too long on any one point. The participants should not be passive observers. They need to arrive prepared to contribute and to remain interested throughout the meeting. The closer generally is going to be the chair.

Herold says meetings should always end with the chair posing the question: “Who’s doing what, and by when.” That way each person acknowledges their assignment and their deadline for achieving it.

“Employee frustration will drop drastically if you can keep meetings focused on the task at hand and avoid wasting time,” Herold says. “You should be able to get more done faster, and with fewer people involved.”

Cameron Herold, author of  Double Double: How to Double Your Revenue and Profit in 3 Years or Less, began his first business at age 21. He has been instrumental in the successful sale, branding and integration of 500 business locations with three major companies. He’s best known as the driving force behind 1-800-GOT-JUNK?’s spectacular growth from $2 million to $106 million in revenue in six years. His range of executive roles includes strategic planning, negotiating corporate acquisitions, operations, people, sales, marketing, call centers and public relations. Herold is a top-rated lecturer at the EO/MIT Entrepreneurial Masters Program and a powerful and effective speaker at EO/YPO & Vistage events around the world.