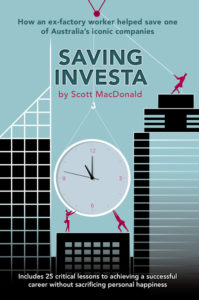 Personal happiness is an afterthought – if it’s a thought at all.

But that’s the wrong way to look at things, says Scott MacDonald, a seasoned CEO and author of Saving Investa: How An Ex-Factory Worker Helped Save One of Australia’s Iconic Companies.

“Hard work absolutely is important, but I’ve met plenty of people who worked hard and never made much money or achieved satisfactory career objectives,” he says. “Working hard is just one part of the equation for success. You also need to be organized, plan, work smart and choose to focus your effort where there’s reward.”

From his decades of experience, MacDonald says he learned numerous lessons that helped him achieve both career success and personal happiness. Here are just five of those lessons:

Don’t expect anyone to give you anything

In grade school and junior high, MacDonald earned money by doing yard work for neighbors, handling a paper route and washing dishes at his junior high school. As a teenager, he bagged groceries, stocked shelves in a pharmacy and worked in a fiberglass factory. “If you want something, work for it,” MacDonald says. “You will appreciate it more and not be indebted to anyone.”

You make your own luck

Former University of Texas football coach Darrell Royal was fond of saying, “Luck is what happens when preparation meets opportunity.” MacDonald agrees. “Nothing in my life that I can think of has been the result of luck,” he says.

Losers have the best excuses

Winners find ways to succeed despite the many roadblocks and unexpected difficulties they encounter. People who are unsuccessful reach for excuses. “Whenever things go wrong, and things always go wrong at some point, look in the mirror for answers,” MacDonald says. “Successful people focus on what they can do to respond to setbacks and don’t waste time playing a blame game or feeling sorry for themselves.”

To be successful, any organization must have a culture of teamwork. Individual stars need to be supportive of the team concept, or those individuals should be moved on. MacDonald once fired a top chief financial officer who was good at his job, but didn’t see the necessity of working with colleagues and was dismissive of others’ ideas. “The entire company performed better after he was gone,” MacDonald says.

Life is too short to deal with “jerks”

No matter how important the project, if someone can’t deal with you professionally and ethically, just pass on the deal and move on. “There will be other deals,” MacDonald says. “I may have lost an occasional deal, but overall my companies enjoyed good success and reputation, which led to other and better opportunities.”

Ultimately, people can moan about how unfair the world is, he says, but all that griping won’t get them anywhere.

“There’s no doubt that the competitive work environment places huge pressures on your time and energy,” MacDonald says. “But the quicker you understand that you’re responsible for your own destiny, the happier you’re going to be.”

Scott MacDonald, a successful CEO with a history of turning around struggling companies, is the author Saving Investa: How An Ex-Factory Worker Helped Save One of Australia’s Iconic Companies. MacDonald’s decades of corporate experience include serving as a senior consultant for Morgan Stanley, president of New Plan Excel Realty Trust and CEO of Center America Property Trust.