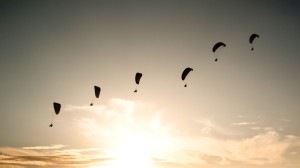 He made a premeditated, free-fall, parachute descent with a pack on his back. After he left the plane, he pulled a ripcord to deploy the chute, and he broke his ankle when he landed. Before this, parachutes were deployed from canisters on the plane. This had become the standard approach in the fledgling flight industry as a safety measure for pilots.

So imagine when Leslie jumped—with no attachment of any kind to the plane—hoping his new parachute would open.

He took the kind of jump that day that most of us wouldn’t take, especially early on in our leadership careers.

While Irvin didn’t design the new parachute or the process, he did make a critical decision of whether or not he would make the jump. Given that his leap of faith led to the opening of a profitable business, the Irvin Aerospace company that specialized in parachutes and other life saving equipment, it seems the jump was absolutely the right decision. Yet at the time, I’m guessing nearly everyone thought it was crazy, rash or just plain stupid. (Can’t you just hear Leslie’s mother saying, “You are going to do what?”)

In honor of Leslie and his fate-filled jump, use this simple acrostic to help you be more thoughtful and complete about the decisions you make, both large and small: JUMP!

You will make better decisions when you consider the situation from a variety of perspectives. What would others think, how would others respond and what would their reactions be? Whether it’s a highly structured review or a quick overview, considering multiple perspectives will provide you with a new vantage point from which to make your decision.

You can JUMP on any type of decision, but here are some times when JUMP-ing might be especially helpful.

Leslie Irvin jumped from a plane in a new way, something most of us will never do (in a new way or not!). While we’ll never know how he made that decision, we all can make better decisions—and honor his spirit—by making a JUMP ourselves. Decisions are made every day, usually relying on past experience, intuition and quick judgments to decide. Some decisions, especially those relating to new ideas, are better decided after an intelligent JUMP rather than jumping to conclusions.