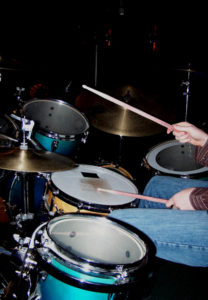 This morning, the Rock and Roll Hall of Fame announced the nominees—including Pearl Jam, Janet Jackson, Journey and more—for its 2017 induction ceremony. That got me thinking about music and bands, and the role each member plays.

The singers in the band are out front, and the lead guitarists often have the coolest solos,  but without the drummer—or with an off-rhythm drummer—the band wouldn’t be good. In fact, it would probably fall apart during most of its songs.

Who drives that rhythm? The leader does. That’s right. If your team was a band, you’d be the drummer. Not the flashy front man and face of the band. While you do get to shine, you’re not stealing the show with over-the-top solos in every song. No you are the force that creates the rhythm for your team. You are the steady beat that keeps everyone else in line.

When you do your job well and set the right pace, the rest of your band (or rather team) can get in sync and accomplish amazing things. However,  if you fall out of sync, you create problems, frustration, turnover, and poor results.

As the drummer of your team, what pace are you setting? Is it too laid back and mellow? Is it too frenetic? Does it ever change? Do you consider how your actions are setting the rhythm for your team’s sense of urgency, sense of fun and level of accomplishment?

Spend some time thinking about your approach, behavior and habits, and reflect on how they are setting the pace and rhythm for your team and organization. Ask peers or team members what they see as the rhythm/pace/energy of your organization, and decide if it is the rhythm you want to foster.

Then take the lead in driving the changes you want to see.

Do agree with me? Are leaders drummers, or do you think they should serve another role in the band? Why?