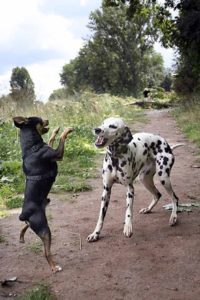 I was working through an issue with a coworker who was distressed over problems with a process that affected us both. I helped to create the process and had the authority to change it. Plus, I had enough knowledge of the process to troubleshoot and fix a fair number of problems.

However, as we were discussing the issue, my coworker kept talking about his concern without giving me any details. Without more information, I couldn’t come up with workable solutions to fix the problem. It went like this.

He talked, often to the point of exasperation.

I grew frustrated trying to get to root of the issue.

He talked some more without offering any facts.

I grew more frustrated as a I grappled with how to resolve the issue for him.

The cycle continued until I finally stopped him and said: “I understand that you are concerned. Is it okay if we discuss how to solve the problem so that we can put your concerns to rest?”

He immediately said, “Yes, that would be great.” His emotional level decreased, and he focused on giving me the information I needed to fix the problem. We had the situation resolved in less than five minutes.

My coworker is in no way a difficult person. He is committed to his work and truly wants to do a good job. He had a legitimate concern, and as a result, he became emotionally invested in the situation. That emotional investment became a barrier to our communication. To break down that barrier, he needed me to acknowledge his genuine concern.

Until I acknowledged that concern, he could not see past it to help me solve the problem. His need to be heard and understood outweighed his ability to focus on the details of the problem.

The lesson in this is pretty simple: When you engage in a tense or emotionally charged conversation with other people, hearing, understanding and acknowledging their emotion about the situation will often create the right environment for problem solving. The converse is also often true. Failure to hear, understand and acknowledge their emotion can create an insurmountable barrier to effective communication and joint problem solving.

Whenever you find yourself in a conflict or when you are mediating one, take a moment to empathize with the other person. Acknowledge their feelings, and then focus on finding solutions everyone supports.